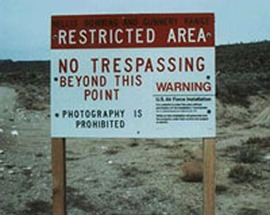 Area 51 is in Nevada, 85 miles N-W of Las Vegas. It is about 575 square miles and is hidden in the mountains around Groom Lake. Area 51 is a top secret military test & development facility which is operated by the US Air force. It has developed unusual high-tech planes such as U-2, F-17 STEALTH FIGHTER, SR-71, Blackbird, Aurora and many other planes.

The only places where you could get a clear picture of Area 51 was at White sides and Freedom Ridge. But these area's were closed to the public in 1995. If you are caught trespassing the boarder you will captured while the Lincoln County Sheriff is called to arrest you. You are then fined $1000. The guards are also allowed to shoot you, although there has been no record of this happening so far (but I doubt they'd tell anybody anyway).


1) Some people think Area 51 is where the Roswell crash happened. That the government closed the area so the public would be unable to look around for proof of anything. I find this the least likely story, as there were a lot of witnesses who stated other locations as the home of The crash site (Mac Brazel, Jesse Marcel etc).

2) Another idea is about the moon landing. Some people believe that nobody landed on the moon that first time. It is thought that Neil Armstrong went into space, circled around our planet for a while and then came back down. The reasons are the following:

- On the 'official' video the flag which was put on the surface of the moon is blowing in the wind. Here's a question for you ..... WHAT WIND. If the moon has no atmosphere, there's no wind to be able to blow the flag (maybe they really did go to the moon and found an atmosphere like Earth's which is breathable and for some reason wanted it kept quiet).

- If you look closely at the video of the moon's surface, you will see that the shadows formed by the rocks and astronauts are going in different directions (Some shadows are facing one way. Other shadows are facing other ways). But in reality there is only one source of light on the moon (from the sun). As light is only coming from one place, the shadows should all be in the same direction.

- The astronauts are the ones who filmed the footage while on the Moon, which you would see today. Because the Astronauts suits are so heavy and difficult to move around in, the camera's were (supposedly) tied around the astronauts waists. They would not be able to film perfect eye level footage (Which they did). And how did they both get in the same footage at times ..... Was the camera handed to ET for a while to get some good shots??

- If you play the video on Fast-forward it looks just like they are running and jumping on the earth's atmosphere / gravity. If the tape was filmed and then edited to play slowed down, it would make the walking look much more difficult and the gravity much thicker.

On a more skeptical note, the strange objects flying around the area could just be secret test flights for new planes. The cold shoulder that some people are given by the army could just be caution ..... after all they don't know who're spies and who're just interested in the strangeness of the subject. Either way, I doubt we'll know anything about Area 51 for certain until they're ready to tell us. 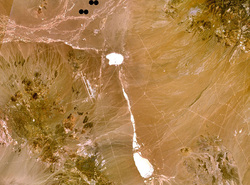 Area 52 is based in the northern fringe of Nellis Range, roughly 30 miles south-east of Tonopah, Nevada; and 70 miles north-west of Groom Dry Lake. It is 625 square miles in size.
Like the Groom Lake facility (Area 51), Tonopah holds an interest for conspiracy theorist's because of it's experiments and classified aircraft. It is currently used for nuclear weapons stock-pipe reliability testing, research and development; as well as Military training.

The test range was withdrawn from public use in 1956. Testing began in 1957. The facility is owned by the United States Department of Energy and managed by Sandia National Laboratories. However in 2008 the National Nuclear Security Administration wanted to move the location to White Sands Missile Range. This move would cost Tonopah a loss of jobs and lost revenue.

Again, as with Area 51; you are not aloud past a certain point to Area 52. It is patrolled by security and is very 'hush-hush'.