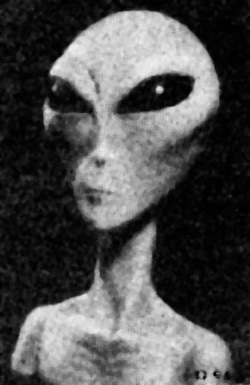 Greys tend to be around 4 feet tall, with large heads. Their chins are pointed and they have large, black eyes. Their noses and mouths are tiny. Although there's the term 'Little Green Men', their skin colour is normally Grey or White, and smooth and hairless. They have small chests and long arms, normally the same lengh as their legs. Its also been reported that they have between 3 and 5 fingers on each hand. The neck is very short and thin, and lacking an Adam's Apple.

Greys are the most likely to be reported in Alien Abduction of Humans (75% of all cases). They are reported to abduct people most often from their bedrooms. They then do medical tests and experiments on the victim, without showing any emotion or care.

This is just a basic description of Greys in General. There are actually afew differnt types of Greys: Type A, Type B and Type C - These are described below.

There are Several types of Greys, the first being Type A (also known as 'Orange'). Type A's are usually 4.5 feet tall. Their heads are large, with wrap around eyes and tiny, slit mouths with no noses. Their genitics are based partly on insectoial genetics.
They are from the Bernard Star in the Zeta Reticulan Star System and their race is known as Zeta Reticuli. This neighbours the Orion area. They are slaves to another Alien race called the reptiles. Their main focus seems to invole Science and taking over several different planets.
Type A's are unable to reproduce by themselves, so they use Cloning as a way to keep their race alive. They're very involved with studying the genetics of other species and its thought that they might be trying to mix human genetics with their genetics. They have taken part in altering Human genetics for over 1000 years. Because they've used cloning as a way to reproduce for so long, its possible that their breed is getting weaker with each clone - This could be the reason for experimenting with our DNA, to bring more life back into their own race.

Its been reported that they have bases in New Mexico and Nevada, as well as several other countries.

The second type of Grey, is Type B. They are much taller aliens at 7 to 8 feet. Their facial features are exactly the same as Type A but they have large noses. Type B's are much less agressive than Type A's, but they should still be considered Hosile.
They come from Orion and have Bases in the Aleutian Islands.

The Third type, is Type C. They are the shortest of Greys, at about 3.5 feet. They have the same simular facial fetures as Type A's.
Type C's are just as hostile as Type A's, and they come from a Star system near the shoulder of Orion  known as Bellatrax.

Seen all over the world, Little People, also known as fairies, sprites and elves were particularly common in pre-twentieth-century reports. But first reports of the Little People go all the way back to the ninth century AD. Modern sightings are rare, but they have been seen in Western Europe in the 1990's. In Hafnarfjordur, Iceland, road workers are very wary about doing road work in certain areas, incase they disturb the Little People. Iceland people have even been known to re-route roads, so they don't interupt the Little Peoples homes. Icelanders truly believe that their land is full of elves, gnomes, trolls, light-fairies, lovelings and a race called "huldufolk," or hidden people.

Little people are normally around 2-4 feet tall, but some have been reported as smaller. They usually have a human apperance and wear bright clothes.

The Little People are very Inquisitive in nature. They normally appear in peoples bedrooms and they have a fascination with time, clocks and watches. They can be mischievous and enjoy playing tricks on people. It is also rumored that at one time, some of the little people were known to steal children. Could this be known today as Alien Abduction?? 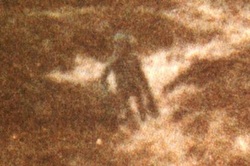 Description - Typically about 3-4 feet tall, their features are basically human but with harsher elements, including pointed ears, and at times swarthy, matted hair. Sharp teeth are occasionally reported.

Activities - Found close to homes on the edges of habitation and sometimes emerging from woods; they gesture and move about a good deal. Can be construed as aggressive, but mostly defensive.

Physical evidence - The best evidence for this type of entity is the single photograph taken by an ex-police officer on Ilkley Moor, Yorkshire on 1st December 1987. The witness claimed that he had been taking photographs at dawn of surrounding villages when he saw the greenish/grey creature beckoning. It fled into a UFO behind a rock. One photo of the creature was taken, but none of the UFO. Although fuzzy, this clearly shows what the witness claims he saw. Tests on the picture by Kodak and other analysis seem to prove that this is a genuine image of a figure just over 3 feet tall. The tests could not establish whether this was a model, a child in a suit or an alien, but the witness stands by his story years later and has never sought to make any capital from his amazing photo. As with many sightings of this entity type, the report location is noted for historical associations with monster and creature incidents.

'Humanoid' is a hybrid term from Latin, 'Humanus' meaning Human and the Greek 'Oeides' which expresses likeness. The tem' Humanoid' was first used in 1918 to describe fossils which were simular to humans, now known as Neanderthals.
The term Humanoid generaly refers to any body form which resembles the shape of a Human, or a creature that has an upright stance. Most comonaly Humanoids have blonde hair, blue eyes and tanned skin, and are the same hight as a Human. They have such a simlar apperance to Humans that they could walk down the street unoticed.
Humanoids are often involved in Human Abductions - They work with the Greys, letting them take the medical examinations, but the Humanoids are in charge. They show concern for humans and have ecological concerns too. They also show films and other images to the witnesses, hoping for a response.

Nordics have been reported in several continents in North and South America but are most common in Europe. They were the main 'Typically Reported' Alien untill the 1960's when the Greys took over. They were quite common in 1987, but are now rare.

Nordics are simular in apperance to the humanoids, they are 6-7 feet tall. With blonde hair, blue eyes, and hypnotic beauty. Their features are related to Scandinavions.

Nordics rarely conduct abductions and medical probing. They normally just want to communicate in a peacful and friendly manor and they go out of their way to make humans feel relaxed and at ease. They have spoken to wittnesses about the Greys wanting to take over the planet, and they appear to dislike them quite abit. Nordics were often reported to poses phychic abilities, such as materialising and dematerialising or floating. Witnesses of the Nordics claim to of been given a gift of seeing the future and also recieve on-going meetings with them.

Habitat - Seen all over world, they are involved in bedroom visitations (without UFO) or during car rides when UFO is large orange or green light.

Description - Often uniformed they appear as shadows or outlines within glowing masses. When seen in detail they are large humanoids with monsterous features. They have many attributes of a hologram - being barely mobile, near transparent and glowing with a vivid light (often green or orange). They are frequentally accompnied by a load buzz or whistle.

Activities - The strangest entities of all, they rarely engage in any kind of meaningful contact. They usually appear and vanish into thin air and seem more 2 dimentional images than living entities. They are frightening in nature and have terrified many, from trained military personal to guard dogs. They have never been associated with abductions.

Physical evidence - Physical is limited. In army base in spain, patrol guards fired volleys of bullets at large, glowing figure aas it floated near the wall. Bullets disappeared. In cyprus army barracks, a guard dog hid under bed covering ears as the harsh whistle accompnied figure. The guard of dog was found clutching his speargun which was loaded to shoot at entity. One photo taken by Jim Templeton while taking Sunday snaps of daughter on Burgh Marsh near Carlisle. He and family saw nothing, but photo depicts white semi transparent figure of large humanoid, floating in mid air.

As is obvious by the name, Reptilians have the DNA of Reptiles. They are served by the Type A's.
Its reported that there is a kind of 'driven asteroid which is inhabbited by 30 million of these creatures. The Asteroid was thought to of entered our solor system in the mid 1990's. They think of Earth as their planet, and expect to have complete control over it once they are back here.
They are an advanced race and are reported to be hostile and dangerous towards humans.