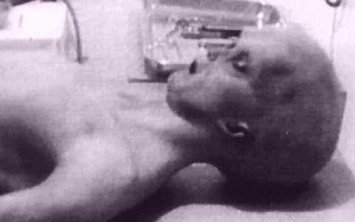 In 1993, the owner of London based company 'Merlin Productions' went to Cleveland, Ohio in search of footage for famous rock stars (example: Elvis Presley). The owner, Ray Santilli placed an advert for the footage and was contacted by a mystery Cameraman. The cameraman presented Ray with something far more exciting. He had actual footage of the Alien Autopsy from Roswell in 1947.

The Cameraman, who's thought to be called Jack Barnett, worked for the Universal News in the 1940's / 1950's. Barnett was contacted and sent to White Sands, New Mexico to film the crash site of a Soviet Spy Plane. However once he arrived it was clear that this was no spy plane. The object he was looking at was a shiny metallic disc which was turned upside down. There were also three or four bodies in and around the object (some were still alive).

The craft was sent to Wright-Patterson Air Base, Ohio. Barnet filmed the wreckage over three days and was then sent to Fort Worth, Texas. The fourth body was stored here and Barnett was told to film this too. He had several rolls of tape, some of which were sent to the Army and others which he was told would be picked up. Nobody ever came back for the remaining film, so Barnett kept it and waited for somebody to come. Its easy to understand how the tape might of been forgotten. With everybody busy, convincing the public that what crashed was a weather balloon and having to cover things up, it could easily slip peoples minds.

After Ray Santilli bought the rights to the footage, he showed it to a selected number of people. This was all very private. But years later, Ray was convinced to show the footage to the public. He started  by showing it to a talk show in 1995. It was later shown on the Fox Network and attracted over 10 million viewers.

Its debated as to whether this footage really is genuine. Ray Santtilli admitted that most of the footage we've seen is fake. The original footage which he bought has been lost or destroyed. But the footage we've all seen is a remake of what was apparently seen. He also says there are small amounts of real and original footage mixed in with the remake. However he's never managed to say which parts are real.

Nobody knows for certain whether Ray Santilli ever really had a tape or whether he made up everything. Was there ever a real tape? And are there others like it?

The above photo was found through Google Images.