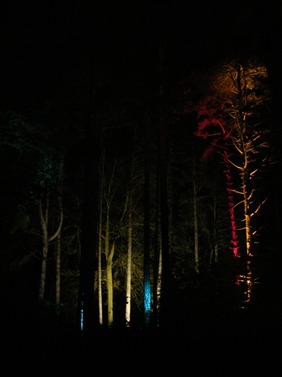 Although Roswell is probably the most famous UFO crash in the World, another famous crash took place at Rendlesham Forrest, Suffolk, England.

On the 26 December 1980, at the Royal Air Base in Woodbridge, Suffolk, 2 US security patrolmen noticed some strange lights hovering in the sky. These lights then dropped suddenly into Rendlesham Forrest. Their first thought was that an air craft had crashed, so they called the Central Security Control at the base for permission to investigate. The men later returned to the base claiming that they had seen a UFO. They even managed to touch it and take a photograph.

At 10:30am the next morning, the military were sent to the scene at the forest. They photographed three depressions in the ground. They were one and a half (1 1/2) inches deep and seven inches across. Skeptics say these were rabbit burrows. However the markings in the ground were exactly 12ft from each other and in a perfect triangle. Radiation was also measured and was slightly higher than normal.

That night, the same lights were seen in the sky again. The deputy base commander, Lt Colonel Halt, was alerted, and he sent out a small group of people to find the UFO. Some of these people were Sergeant Jim Penniston, Ed Cabansag and John Burroughs from RAF Bentwaters.

As the three men approached the site they felt a strange, static feeling in the air, like their hair was stood up on its ends. Still they made their way towards the light they had seen. As they moved closer they saw the object, it was a red pulsing light, tank size and there was something which looked like Molten Metal dripping from it. There also appeared to have been triangular landing gear on the bottom. As people approached the object, it seemed to back away from them and went into a field. The object then separated into smaller lights, which shot into the sky and threw down thin beams of light, some were aimed at the weapons storage area.
The UFO then appeared for a third night in a nearby field. Witnesses have claimed to of seen the occupants of the craft, who were having a quiet discussion with the wing commander, Gordon E Williams.

If you ever decide to visit Rendlesham Forrest, there is a specially made 'UFO' walking trail. This trail takes you around the area where the UFO was apparently seen on the 26th December 1980. I was also told there is still a scorch mark in the ground which is visible today.